AEVUM presents an aesthetic encounter between contemporary and ancient art. Throughout the exhibition, the visitor is invited to change their perspective and reflect on the idea of a timeless creative experience, where present and past come together. The artworks are thus not arranged in any chronological order, but they rather follow the criteria of instinctiveness and materiality, on an entirely emotional journey.

The Museum’s three unique artworks are concerned with the Etruscan underworld, a true and profound cult of the deceased who, according to their religion, are destined to live eternally even after physical death. Upon entering the exhibition room, the visitor is greeted by a 4th-3rd century B.C travertine funerary marker – once an indication of the presence of a tomb –  with a very peculiar shape and an obscure text inscription. A few steps aways, as evidence of a complex burial ceremony, there is a 6th century BC impasto ceramic cinerary vase, featuring a simple decoration and a cangiante colour. Finally, a magnificent alabaster cinerary urn from the 2nd century B.C. concludes the itinerary and stands as the iconic object of the entire Volterra Museum collection: the feminine, ethereal, delicate but austere depiction on the lid contrasts with the essentiality and purely masculine world of the container, whose figures, bearing the marks of time, have hidden features but which are still extremely expressive.

These artefacts are juxtaposed to Eleanor Herbosch and Akiko Hirai’s artworks. The vivid, scratched, marks made in oil, acrylic and clay of Herbosch’s paintings reminiscent of mysterious hieroglyphics, establish a connection with the same emotional charge of Etruscan writing. Raw earth, along with its tactile and diverse chromatic qualities, has entered into Herbosch’s creative vocabulary. The surfaces of her painting are coarse, deep, textural and almost three-dimensional.

Next to these paintings, are three ceramic vessels of Japanese ceramist Hirai, internationally known for her Moon Jars series, highlighting an exploration of contrast, the juxtaposition of coarse clay and translucent glaze. Among the exhibited artworks, two Moon Jars pieces present forms that appear to be on the verge of collapse, geological in aesthetic and almost volcanic in their surface energy.

AEVUM, running from 8 of July to 4 of September 2022 in Palazzo dei Priori, inaugurates the three-annual project TIMELESS ENCOUNTERS | ETRUSCAN AND CONTEMPORARY ART and takes a part in the rich cultural programme of Volterra as First Tuscan City of Culture 2022. The exhibition project, promoted by Associazione Culturale Anima Silvae e Museo Etrusco Guarnacci, has been made possible thanks to the collaboration of the gallery KALPA Art Living and the generous support of Altair Chimica (Saline di Volterra) and MATTEOBRIONI srl (Gonzaga, Mantova). The exhibition is also supported by Comune di Volterra as part of the funding for the year of First Tuscan City of Culture 2022. The project is under the Patronage of Regione Toscana. 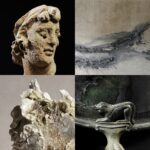